The Beast from The East

Beauty and the Beast .....from the East

The beast from the east was forecast for days before it hit, and it did bring lots of powdery snow , strong winds and a real wind chill. Due to work commitments I could not get out to take images during the teeth of the storm, but as things settled i did manage to get a couple of lovely images.

My local go to place is Northumberlandia , its quick to get to and the small wooded area is really good to capture the smaller vistas. I took this image as night fell. This image was of a 5 second exposure, to try a catch the light that was being reflected by the snow. I took a number of images trying to get a good pattern with the trees to help with the composition. There is a ditch that runs through the wood and the snow has not covered the edge, giving an s shaped lead into the image - hopefully it draws your eye through into the depth of the woods.

It was cold and so much darker than the image shows. Post processing I have increased the exposure and added more contrast but other than that not much more to do. It's always good to capture the image in the camera rather than relying on my photoshop skills.

As the darkness fell, i took more images with light filtering through the trees from the local Pub, it looked really good.

For me this image is not the normal snowy image, but it does reflect the cold and wintry nature of early march, but does have a ephemeral look to it 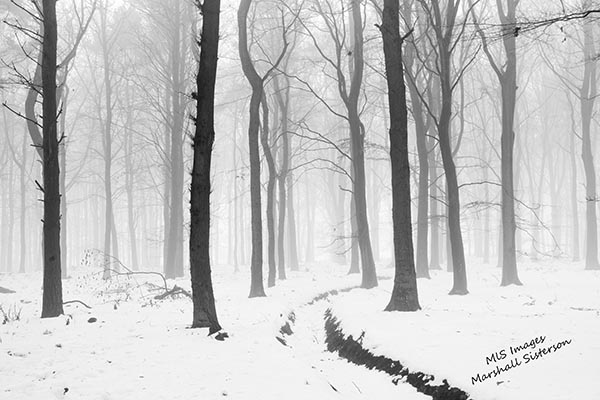